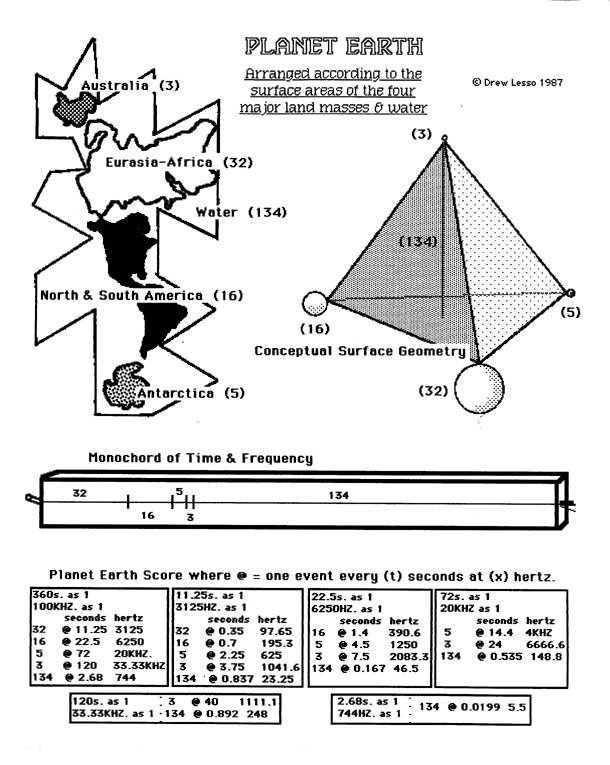 Planet Planet Earth is dedicated to R. Buchminster Fuller and his breakthrough projection, Dymaxion Airocean World. It is the first map that gives true proportions in 2D that can also be folded into a 3D icsohedron. For the music 100khz is the max frequency and the total duration is 360 seconds. These units are divided by the proportions of the major land masses and water to limiting factors of 5.5hz and 0.0199 second. Planet Earth was realized using a Yamaha DX7, Jackson Model 655 oscillator, Arp odyssey and a Casio stopwatch accurate to 0.01 second.

This drawing shows the proportions I measured for Planet Earth (134, 32, 16, 5, 3). I also found inspiration, again, in R. Buchminster Fuller's Linear Tetrahedron of three dimensional universe, from his book No More Second Hand God. It fit perfectly since 5 elements can describe our planet. The spheres of the major land masses are placed upon the 4 vertexes. This shows a good approximation of just how much water this planet drinks. We should be concerned!  In 1987 I used a combination of Atlas and calculator to aquire data. Future available earth data could move this graphic to an extended geodesic. Consider the core matter of the planet, micro/macro, water, atmosphere! An actual Earcon replacing graphical elements with sound. Making the most of our senses through consciousness. I gave the above drawing to sculptor Pamela Burgess for a collaboration at Otis Parsons outdoor box at MacArthur Park and Wilshire Blvd. in Los Angeles.

Pamela's sculpture with the accompanying music played together as Planet Earth nonstop for 18 months on the corner Wilshire /MacArthur Park in Los Angeles 1987-8. As we were doing monthly maintenance a group of children from the neighborhood approached and asked if the sculpture was receiving sounds from outer space. If they only knew how right they were!