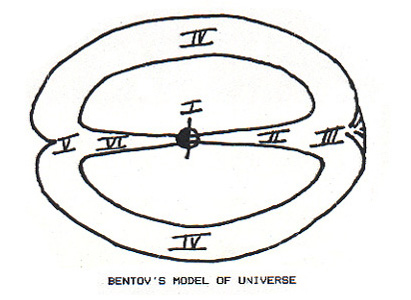 Bentov's Universe
Bentov's Universe is dedicated to Itzhak Bentov, best known for his book "Stalking the Wild Pendulum" Bantam Books, 1976. At the time of his death in 1979 he was involved in studying the effects of altered consciousness on human physiology.

Bentov describes universe as a cyclic system having the shape of a torus, visualized as a doughnut. His universe is constantly being created and recreated in six discrete steps: 1. Gravitational collapse - black hole. 2. Super Nova Big Bang expansion, like aiming a jet of water to the sky. 3. Gravity takes hold of the jet and the flow reverses. 4. Slow oblong journey to the opposite pole. 5. Sudden contraction as the falling water comes under the influence of the black hole. 6. Sucked-up into the black hole. 7. Start all over again. At the nucleus Bentov places a white star that is constantly exploding and a black star or black hole that is swallowing everything in its path.

According to Bentov a complementary oscillation exists between the ionosphere, the earth and with the micromotion of the body during meditation at 6.8-7.3 hertz. A metronome setting between 100-112 for a quarter note pulsates this oscillation at a sixteenth note. I began investigations for this work by measuring Bentov's six step map of universe with a curvimeter. These measurements as ratios are used to divide a three-minute duration into the following time organization in seconds: 5, 28, 20, 77, 20, 28. These steps are audible at chime soundings. The conductor maintains a strict tempo for the string section, sampled strings and percussion. The rest of the orchestra is free to wander between chime soundings, but within limits of a tempo rubato at 100-112MM/quarter note.

The orchestra divides into three sections for event formatting: bass drum, sampled strings and orchestra. The bass drum plays a diminutive echo of the big bang throughout. That is total time divided successively to zero by the inverse amount of big bang time (180/(523/539)). The series is reversed and becomes the diminutive big bang echo. Dividing total time by each of the remaining five cycle steps gives the time format for the sampled strings. The rest of the players follow a harmonic division of time. To accomplish this the total duration is considered as a string 1ength divided 2-14 times. This provides 63 moments with 12.8-second appendages at each end. The appendages are filled with pitched and non-pitched glissandi to a 64th division, (14/15, 15/16, 16/17...63/64). Computer programming was employed for the time calculations. The search allowed for durations no smaller than a sixteenth note.

Individual tone elements were found by searching for intervals that are separated by 6.8hz to 7.3hz and harmonic octave multiples, 13.6hz to 15hz and 27.2hz to 30hz, each to a limiting factor within the range of the pianoforte. The sampled string part uses intervals that are separated by perfect fifth multiples. A computer program written to search data tables for these coincidences allowed me to score intervals that satisfied the time-tonal structure and complete this harmonic abstraction of Bentov's Universe. In Europe, one bright musician asked me how I could hope to describe universe in such a short amount of time, I answered, universe is instantaneous.

This work was first performed in 1987 by the USC New Music Ensemble (19 piece) with Donald Crockett conducting. It was part of 19 three-minute miniatures presented by the Independent Composers Association and New Music Los Angeles at the Japan America Theater. We hear this version here (© KUSC 1987).  Bentov's Universe was also performed in 1988. It was presented by the International Computer Music Conference at the Cologne Philharmonic and performed by Ensemble Köln with Robert HP Platz conducting.