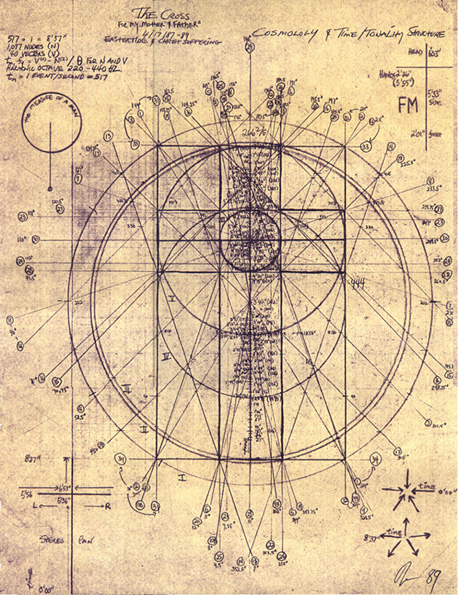 THE CROSS
For my Mother and Father

Intention
The Cross is intended for meditation on Jesus Christ suffering. The listener should choose a quiet time and environment accompanied by private prayer and reflection. The music is not quiet and as such represents deep pain and suffering that at times subsides, but otherwise is relentless. In the face of mans inhumanity toward his fellowman, the impetus of Christianity is not to be found in the adoration of Jesus Christ, but rather in his selfless example; carrying an exemplary burden, the human condition.

Conception
In January 1987 I was talking with my Dad, an electrical engineer and musician, about Harmonics and its application to writing music based on ratios. He made a comment about how 'other worldly' this type of music seemed. Later in the conversation he suggested that I use the Christian symbol of the cross with its ratios as a music generator.

On Good Friday 1987 I spent the time from noon until 3 o'clock meditating while drafting a blue print based upon the cross symbol. The drawing along with notes describing an accompanying harmonic theory were left untouched until the summer of 1989 when the work was completed.

Theory
The drawing for The Cross is comprised of 40 rays circumscribed by a circle. Choosing a scale of 50 per inch, the diameter of the circumscribed circle measures 517 units. Allowing each unit to equal one second, the duration of the work is 8 minutes 37 seconds.  It is customary in my work to decide a total duration at the start.  Then the work of composing music is no longer percieved in the traditional linear fashion.  While it takes some getting used to, I've enjoyed this process very much and have grown to appreciate the musical benefit of starting with a whole duration.

There are 1,097 nodes for both actual crossing and perpendicular coincident crossing of rays. A bit of irony here with crossing lines. The nodes are utilized as time and timbre harmonics. For time, each ray is considered as a string length with the nodes acting as time placement coefficients. All timbres have a one second duration. Each is composed of all nodes within a ray and form huge sonic clusters.  There are 80 timbres, each set microtonally. They move through time toward the center of the blue print. Once there, each ray changes its fundamental and continues moving toward the outer circle and completion. Rays that do not intersect the center of the circle are proportionally adjusted to allow all rays to start at zero time.

The immense job of sorting rays and nodes into time and timbre events is accomplished using a bubble sort program in BASIC. In order to work with the 80 fundamentals I use a simple letter code scheme. Since each ray has two fundamentals the coding proceeds as AA,AB,BA,BB,CA,CB and so forth. The output of the program organized the coincidence of rays in time and was used as a score to step time a sequencer and obtain the final version of the work.

Additive synthesis of up to 64 partials generates each of the 80 timbres. The steady agonizing one second pulse and a decision to make timbre clusters sharp sounding was intended to depict what it might feel like when confronted by intense and seemingly relentless pain.

Blue Print
You hear a huge 40 part one second ray timbre at the beginning and end of the work. These large clusters coincide with the outer circle on the blue print. Rays less than the diameter of the outside circle are adjusted to that diameter. If you can visually imagine these shorter rays arcing up from the blue printed page, with one end fixed on the circle to their full diameter heights, you will perceive a three dimensional form for 'The Cross'. Once comprehended, this form becomes a time stretch for the ears and affects a listeners perception in a visual harmonic field; imagined as a four dimensional sound space meditation. A version where all 80 rays start and end together would be interesting.

The arrows on the lower right of the main blue print drawing show the direction for the passage of time along the rays. The numbered time line on the blue print shows all perpendicular coincident nodes. Each ray was handled in this fashion. All other nodes are listed separately to preserve the drawing.

Those rays which intersect at the six wounds of Christ are marked with an elongation of Frequency Modulated sound, labeled FM on the blue print. The stereo mix also takes the form of a cross.

Equipment & Reference
'The Cross' was realized using a Macintosh SE computer with Softsynth additive synthesis by Digidesign for creating the timbres, Sound Designer by Digidesign for mixing the rays, Performer 2.2 sequencing by Mark of the Unicorn, Yamaha TX16W Sampler and Yamaha FM synthesis. The recording of the work was accomplished bouncing 23 tracks onto a 4 channel recorder with the final mix to DAT digital recorder. A bubble sort program coded by D. Wheeler in Personal Computing, July 1980 was modified to accept the variables and sort the time structure. The idea for dividing the circle into frequency domains, and string lengths used as carriers for harmonic data can be found in Hans Kayser's Lehrbuch der Harmonik, Occidental Press, Zurich 1950.