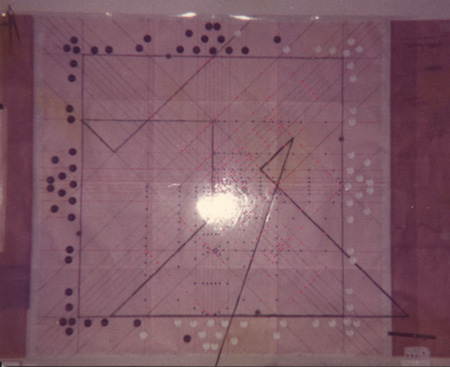 Harmonic Cosmology
I created the diagram shown above in 1975. Then I had studied Harmonics for already two years. This was my first silent instrument based upon the Lambdoma that I constructed on millimeter paper under the heading of Almost Music. The main square bounded by the large black and white circles describes the range of hearing. The small red and blue dots chart the ratios of the Lambdoma. The black line vector that starts on the bottom middle of the diagram which goes up, swings down to the left and across to the right, then up again, then across and down to the right, then finally up to exit the diagram at the top middle describes a melody at the points where the black line crosses itself. This was my musical inspiration for making the diagram. As I lived with this instrument I began to realize that transposing the square representing the range of hearing to the octaves above the range of hearing, in the direction of the diagonal up to the right, would show the upper registers for animal hearing. Further upward transpositions of the main square reach into radio frequency, microwaves and eventually light and beyond. In this same fashion downward transpositions of the range of hearing, in the direction of the diagonal down to the left, first lead us to rhythmic pulsation and further transposition lead to geological time back to the Big Bang and Universe. These downward transpositions also chart the extremely small down to string theory size. In the Lambdoma diagram, directly below, you will notice ten circles in black with white centers. These ratios are not members of any other ratio family on the index 16 Lambdoma. With each increase of index there will appear new ratios of this sort. I imagine them as a sea of holes, when at extreme indices their ratio values may fail completely, but are nonetheless surrounded by more familiar ratios. I realized that both ends of this spectrum, macro-micro taken as a whole, fold back on one another at some extreme distant point in space-time and conversely time-space. The beauty of this system lies with the idea of octave transposition of frequencies from outside the range of hearing back into the range of hearing. These transpositions are only limited by the frequency resolution of current frequency generators. Even with this limitation an observer will find that Harmonic points tend to gather at specific ratio nodes. These ratio nodes are usually, but not limited to the smallest whole number rations. This completes the realization of Harmonic Cosmology.
© Drew Lesso 2007

Close up of Almost Music diagram below.